Casting material for LED screen is high elastic sealant silicon material. It has excellent stress release, moisture protection, anti-UV, thermal stability and low ion concentration. Generally, resin A and harder B are packaged respectively in two chambers. While used, resin A and harder B are mixed according to proportion and uniformly stirred. Traditional casting technology is divided into two steps, namely mixing and casting. The volume of materials is very large and it does not only expense more time and materials, but also pollutes the environment. Resin vacuum casting technology adopts an on-line meter mix dispensing (MMD) technology. It requires presetting a casting amount and stirring and degassing and heating materials in advance. And then cast LED screen according to the set amount. This casting technology mixes materials according to the demand. Therefore, the mixture is fresh always. It has excellent infiltration, thus facilitating to automatic operation.

The casting system is composed of thin film degassing system, meter mix dispensing system, vacuum casting system and electric control system. Its principle is shown as Fig. 1. The system has six sets of casting valves and casts six work-pieces at the same time. Firstly, resin A and harder B are loaded into their respective tanks and fully degassed. Secondly, degassed materials are inhaled into their respective positive-displacement metering pumps and measured and mixed according to the volume ratio. After the vacuum of casting chambers achieves to the set value, positive-displacement metering pumps driven by executing cylinders inject the quantitative mixture into the mold and then valves move one work station along X axis. The above operations are repeated. After casting six-row work-pieces, the valves return to the initial position. Then they move a certain distance along Y axis and begin next six-row casting. The work interface of resin vacuum casting system is shown in Fig. 3. 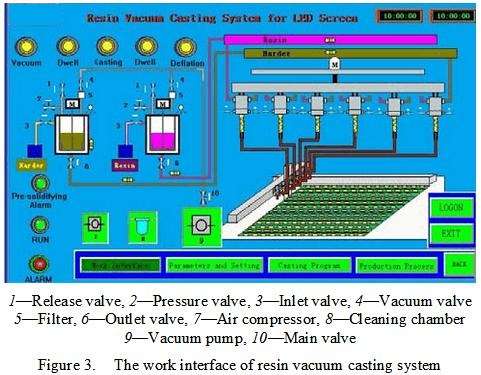 Thin film degassing system and vacuum casting system request a good vacuum. If the vacuum is not offered well, the casting quality will not be assured. Therefore vacuum pumps or vacuum systems take a important part in the resin vacuum casting technology for LED screen.