Why does vacuum pump corrosion

The corrosion forms of metals can be divided into two categories: overall corrosion and local corrosion. Overall corrosion occurs evenly on all surfaces of the equipment, while local corrosion only occurs locally. Corrosion will not only cause economic loss of enterprises, but also cause harm to safety and environment, and increase the loss of natural resources. However, the phenomenon of vacuum pump being corroded is generally divided into two kinds, one is uniform corrosion shape, the other is partial corrosion, the former is uniform corrosion, the latter is in a small part, why is the vacuum pump corroded? During the operation of the vacuum pump, the scaling phenomenon caused by working fluid, calcium and magnesium hardness, pH value, conductivity, temperature and other factors will cause damage to the equipment. The vacuum pump manufacturer will share with you the causes and treatment methods of the vacuum pump corrosion.

The material selected under this working condition is unreasonable. The pump shell, sealing liquid disc and pump cover of vacuum pump are made of gray cast iron. Cast iron is easy to cast parts with complex structure, but its strength is low and its corrosion resistance is poor. Because the medium treated by the pump contains a small amount of HCI gas, the working fluid is weakly acidic. The graphite in gray cast iron is distributed in a network, forming a high efficiency primary cell in weak acid solution. The reaction of iron is to lose electrons, i.e. oxidation reaction. Iron is anode, and reduction reaction is carried out on Fe → Fe2 + + 2E. Graphite. 2H + + 2e → H2, graphite as cathode, this kind of reaction is very easy to graphitize gray cast iron, produce selective corrosion, iron is dissolved, and the remaining graphite, holes and rust layer constitute porous and loose material, which makes the proportion of iron decrease, strength and mechanical properties decrease, but the external dimension has no obvious change, which is very dangerous, which is the main reason for the corrosion of the pump.

2. The effect of cavitation

The metal components in the liquid, due to the rapid formation and destruction of the steam bubble on its surface, cause the damage with hole characteristics, which is called cavitation. Cavitation often occurs on the metal surface where high-speed liquid flow and pressure change rapidly. During the normal operation of the pump, the liquid ring gradually moves away from the wheel body in the suction stage, forming a negative pressure, and sucking the pumped medium along the axial direction. When the pressure is lower than the vapor pressure of the liquid, bubbles form rapidly. In the discharge stage, bubbles break rapidly under pressure, and the shock wave produced is like a “water hammer”, which is enough to damage the metal surface. The exposed metal surface is further corroded by the medium A new protective film is formed. Such a process is repeated continuously, and finally a cavernous pit is formed. Cavitation is the result of the interaction of mechanical and corrosion factors, and the disk erosion pit of the vacuum pump is caused by cavitation.

The high velocity of medium has the function of mechanical wear, especially when there are solid particles in the working medium, the wear is more serious. When the liquid ring in the pump casing flows at high speed, the passivation film on the surface is broken, and the corrosion products are rapidly removed, resulting in new passivation film, which is rapidly removed again and again, causing impact wear on the pump casing. The pump is dry catalyst dust. When nitrogen back blowing, powder particles are absorbed into the flow channel, which makes the erosion phenomenon intensified. At the root surface of impeller, the working fluid is forced to diverge. When the fluid suddenly changes direction, the fluid directly impacts the metal surface of the pump casing, causing more serious corrosion than other parts, resulting in a circular erosion groove at the root of the pump casing, which is as thin as paper. 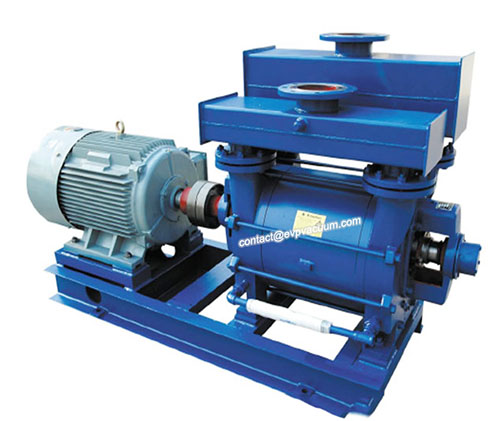 2、 Mixing material: mix in strict accordance with the proportion, and mix evenly until there is no color difference.

3、 Coating material: apply a thin layer of material first, ensure the bonding and full coverage, and then evenly apply the material to the repair surface to achieve the required repair thickness.

6、 In normal operation, pay attention to check the operation and lubrication of the bearing. The temperature (at the bearing and the outer circle) is generally 15-20 higher than the ambient temperature, and the maximum is not allowed to exceed 30-35.