In recent years, due to the development of electronics industry and the increase of space exploration activities, the leak detection technology has been developed rapidly. The helium mass spectrometer, which USES helium as tracer gas, has been rapidly introduced into various applicable fields. Compared with other detection methods, helium mass spectrometry detection method is different, with its high detection sensitivity and high speed, it can be used for qualitative, quantitative and fixed-point detection, especially choosing non-destructive, non-toxic and non-dangerous inert gas helium as the tracer gas, which makes it one of today’s leakage detection instruments.

Helium mass spectrometry leak detector has been used to control and monitor product quality in many scientific fields and manufacturing industries. Especially in recent years, the electrical and electronic products supervision and inspection departments and manufacturers, refrigeration, automotive, aviation, aerospace and other industries to strengthen the consciousness of “strives for the survival by the quality”, they will in the helium mass spectrometer leak detector is used in production line and scientific applications at the same time, continuously explore its application in the industry development and accumulated a lot of experience. 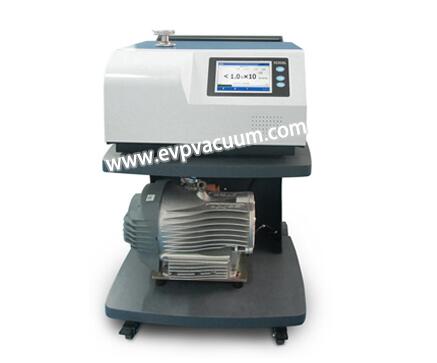 Helium mass spectrometry leak detector is a complete system based on the principle of mass spectrometry, which USES helium as tracer gas to locate, quantify and measure the leak gap of vacuum equipment and sealing devices. 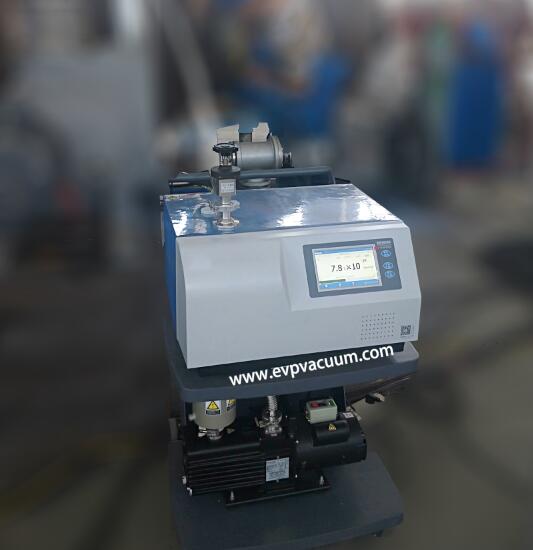 In the electrical and electronic industry, according to the requirements of different products for sealing, the leakage detection methods such as spray method, suction method and pressure method are often used.

According to the different products, you need to choose different sizes of fixtures or auxiliary tools such as shell leak detection. After the leak detector works normally, the leak rate can be calibrated with the standard leak hole, and then the shell can be blown and tested. First, the fixture is fixed in the leak hole, and the shell to be measured is placed on the rubber plate above the fixture. After the auxiliary pumping system pumps it to the predetermined vacuum, it is automatically connected to the measuring system of the instrument. Then, a spray gun is used to continuously spray helium into the shell for 1 ~ 3 seconds. When there is a leak hole in the shell, the helium will pass through the leak hole into the mass spectrometry analysis part of the instrument, and the leak amount will be directly displayed on the leak rate meter. This method can determine the location of the leak hole and measure the size of the leak hole. The entire detection cycle takes only one minute.

Before leak detection, it is necessary to calibrate the sensitivity of the suction gun of the instrument, and then fill the container with helium gas higher than one atmosphere. Some containers are of thin plate structure, so it is recommended to make clamps outside the container to prevent deformation and damage of the device during high pressure. When the suction gun moves along the welding seam, the speed should not be too fast, leaving the surface about 1mm, so as to ensure the inhalation sensitivity, and make the probe into the horn mouth shape for better effect. At present, the leakage rate of these large electrical devices is generally within the range of 10-6 ~ 10-7 pa.m3 /S.

We believe that with the wide and deep use of helium mass spectrometer in this field, the standards and methods for leak detection in this industry will soon be established.

3. Leak detection by back pressure method

This leak detection method is suitable for small electronic devices. Firstly, the instrument is adjusted, and then the device is put into the pressurized tank and pressurized with helium. The helium gas enters into the device with leak hole, and the device without leak hole only absorbs helium gas on the surface. Pressure pressure and time of the device are determined according to GB2423 and 2328 documents. After the device is taken out of the pressurized tank, the helium gas absorbed on the surface is blown off and then pumped into the leak detection fixture. After the vacuum is pumped to the set value, the fixture is automatically connected to the measuring system of the instrument. At this point, the helium gas inside the device with a leak hole is detected, and the leak rate is shown on the leak rate meter. General back pressure method leak detection using elimination method. If a certain number of devices are placed in the fixture, the total leakage rate of this batch does not exceed the predetermined value of scrap, indicating that this batch is qualified; If the total leakage rate exceeds the predetermined value of discarding, half of the remaining half can be removed, and the remaining half can continue to be detected for leakage. The qualified half indicates that the device with leakage is in the other half, and then the device with leakage will be detected until the device with leakage hole is detected.

This method of leak detection can sometimes be missed. This is because those devices with large leak holes will run out of helium gas before they are put into the leak detection fixture, so crude inspection of the devices is usually required before backpressure detection.

At present, helium mass spectrometry leak detector is widely used by electronic product supervision and inspection departments and manufacturers for product quality supervision, and their own standards and methods have been established.

No matter which leak detection method is adopted, it requires the operator to have careful observation ability and high sense of responsibility, because false detection and missing detection will cause losses. In addition, the alertness and proficiency of the operator in discovering unknown things are also very important.

— How to use negative pressure vacuum pump