Because there is a pressure difference between the fluid inside the pump and the atmosphere outside the pump, in order to prevent slurry leakage, so the pump needs to be set up in the operation of the seal device, called the shaft seal. The types of shaft seals commonly used are: packing seal, mechanical seal, dynamic seal and floating seal. The mechanical seal has become the common seal form in all industries, and the seal form runs smoothly and reliably, bringing great economic benefits to all industries.

Mechanical seal is a sealing device composed of two sealing elements (static ring and moving ring), which are perpendicular to the axis of the smooth and straight surface fitting, and do relative rotation, as shown in Figure 1. It is based on the elastic member (such as spring 6) and the pressure of the sealing medium in the rotating moving ring and static ring on the contact surface (end face) to generate appropriate compression force, so that the two end faces closely fit. 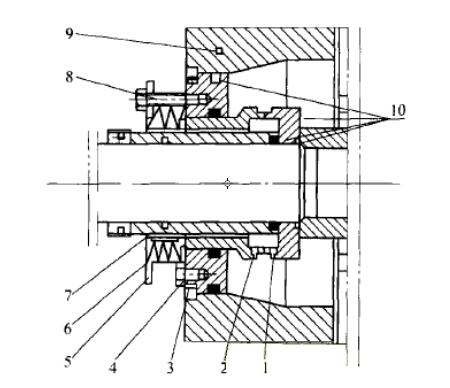 A very thin liquid film is maintained between the end faces to achieve the purpose of sealing. The liquid film has fluid dynamic pressure and static pressure. It ACTS as a lubricant and seal. Slurry pump, desulfurization pump and other products in different working conditions can be used mechanical seal.