Analysis of Main Causes that Oil Return of Diffusion Pump

(1) Condensation on the surface of the top nozzle oil film evaporation, or oil film re-evaporation after crawling to the nozzle outside surface, these part have 70% of the total amount of oil return.

(3) The scattering of the vapor jet after colliding with the pump wall is related to the intensity of the jet.

(4) The diffusion of the oil molecules to the high vacuum side in the vapor jet is related to the jet temperature.

(5) Oil film or oil droplets flowing back to the oil sump from the pump wall are heated and evaporated again in this area before entering the oil sump.

(6) Pump oil thermal cracking or catalytic decomposition due to contact with the metal, resulting in light more volatile components.

(7) Pump oil has paroxysmal boiling in the use process, resulting in a sudden burst of nozzle steam flow, the irregular heat movement be exacerbated, resulting in oil vapor return. 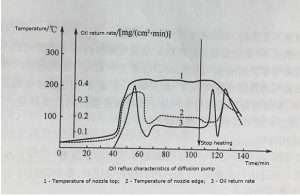 At the period from the beginning of heating to stop heating of diffusion pump, the oil vapor reflux rate and the temperature of nozzle top and edge changes with time as follow: 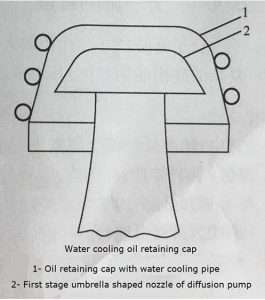 Part 2 : In order to reduce the return flow of pump oil, the following measures can be taken:

(3) Install a water-cooled baffle between the diffusion pump port and the system being pumped. To further improve the oil retaining effect, using liquid nitrogen cooled cold trap. It is worth noting that the installation of a water-cooled baffle or cold trap will reduce the conductance of the suction pipe between the pump port and the vessel, then reduce the effective pumping speed of the diffusion pump.

(4) At the heating initial stage and soon after stopping heating of diffusion pump, it appears several times oil return rate more than the normal use. Therefore, it is advisable to disconnect the pump from the pumped vessel through the vacuum valve during this time.

(5) Diffusion pump heating power should be maintain around the best value, overheating and underheating will increase the oil return rate. In the overheated state, it will also produce a large number of light distillate then vessel be contaminated.

(6) vessel that be pumped and high vacuum catheter should to be often bake cleaning.

(9) Once the vacuum system is contaminated with oil vapor, a certain amount of dry nitrogen can be flushed into the system to flush the vessel. As long as the pressure of nitrogen is high enough (0.1-0.2 Torr), CO2, H2O, oil vapor molecules or other contaminants adsorbed on the surface will be displaced and pumped away by continuous adsorption and displacement of nitrogen molecules. After a period of continuous flush, the vacuum system can be restored to the clean state.