The liquid ring vacuum pump and turbine blower is the modern papermaking, two of the most common in the vacuum system vacuum equipment, through comparing the development history of the two on the paper, working principle, structure characteristics and application characteristics of vacuum system, summarizes the advantages and disadvantages of both, the hope can give paper industry related technical personnel to provide the reference when choosing the vacuum generating equipment.

Turbine fans also appeared in the early 20th century, originally used as compressors. In 1900, the first turbine compressor was manufactured by la to factory in France. Sulzur company of Switzerland began to develop turbine compressors in 1903 and was one of the earliest manufacturers of turbine vacuum fans. Man turbine company is a leading manufacturer in China that can provide the turbine vacuum fans for the paper making vacuum pump system. The turbines produced by the company have been used in the paper making vacuum system for more than 60 years, mainly including RC, RCL and RT series of turbine vacuum fans. According to foreign paper technology textbooks, dreiser corporation of the United States used to produce turbine fans for paper vacuum systems, but now the company is not involved in such applications. China’s existing shaanxi blower factory, shenyang blower factory and Shanghai blower factory and other manufacturers of turbine fans, are not involved in the paper industry.

It can be seen that liquid ring vacuum pump and turbine fan originated in the same period, and both have a long history of application in paper making vacuum system.

3. Comparison of working principles
The working principle of the liquid ring vacuum pump is: the impeller and the pump body are eccentric configuration, when the impeller rotating, water in the centrifugal force along the pump body wall formed nearly equal thickness of the rotating liquid ring, the inner surface of the liquid ring and the outer surface of the impeller hub to form a crescent shaped working cavity, and is divided into different size of the impeller blade cavity. The volume of the first half rotating cavity gradually expands, and the gas is inhaled from the outside. The volume of the cavity in the latter half of the rotation gradually shrinks, and the gas is compressed and then expelled from the outside world. Thus completed the inhalation, compression, exhaust three working stages. Usually used in paper mills is a single-stage liquid ring vacuum pump, which can provide a full range of vacuum capacity.

The working principle of the turbine fan is to make use of the interaction between the blade and the gas. The impeller rotates at high speed to increase the pressure and kinetic energy of the gas. Multistage combination compression is usually used to obtain the final required pressure. When used as a vacuum generator, the final discharge pressure is atmospheric pressure, while the suction pressure is negative pressure. Usually, multi-stage centrifugal turbine fans are used in paper mills. The pressure increases step by step. There are suction inlet at all levels. If a single-stage turbine fan is used, it can only work in a small vacuum.

Due to the different working principles, different speed is required. The working speed required by the water-liquid ring vacuum pump is relatively low. The general linear speed of the impeller is 14~24m/s. Because the gas flow rate in the liquid ring vacuum pump is low, and will be cooled by the water in the liquid ring pump, so the suction and discharge of gas temperature is almost constant. However, the flow rate of the gas in the turbine fan is very high, and the heat generated by friction and compression will cause the gas temperature to rise sharply, so it is often necessary to add cooling devices in the intermediate stage. The turbine fan is a dry vacuum generator, which is more efficient than the liquid ring vacuum pump that needs to drive the liquid ring. However, such a dry vacuum device is more sensitive to water, and more water entering the turbine fan may directly lead to its damage. In addition, when the suction flow is less than the design value of the turbine fan, the airflow may detach from the blades of the fan, resulting in rotational stall. With the emergence and development of stall, another unstable working condition phenomenon may occur. The gas flow and exhaust pressure of the fan periodically fluctuate with low frequency and large amplitude, causing strong vibration of the machine. This phenomenon is called surge of the turbine fan. 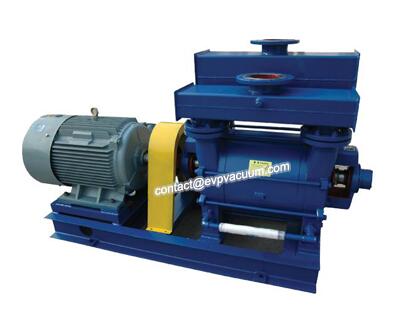