Creating vacuum is an important process before charging refrigerant in the production or maintenance of refrigeration equipment, that is, the process of connecting the vacuum pump to the piping of the refrigeration system to eliminate non-condensable gases and moisture in the system piping.

The following is a picture of the 2XZ series rotary vane pump in this application:

The role of the vacuum pump in refrigeration equipment is:

1.Remove the non-condensable gas in the system: the presence of non-condensable gas will increase the condensing pressure of the system, increase the temperature of the exhaust gas, affect the cooling effect; it may also cause the carbonization of the lubricating oil at high temperature, which will endanger the normal operation of the compressor. Even burn out the compressor motor.

2.Remove moisture from the system: Moisture is the biggest killer in the refrigeration system (specifically, the Freon system in the vapor compression refrigeration cycle); first, the lubricant and water will generate acid, which will corrode the system and cause “copper plating.” “Phenomenon, damage to the compressor; at the same time, moisture will cause ice in the expansion valve port or capillary, and there is “ice blockage”.

The vacuuming operation of the refrigeration system should be carried out after system cleaning, sewage discharge and pressure test leak detection. Vacuuming can further check the system for air tightness, and can eliminate air, moisture and other non-condensable gases in the system to prepare the system for refrigerant charging. Vacuum pumping is carried out using a vacuum pump. For small refrigeration systems that use medium and small open, semi-hermetic compressors, the compressor of the system itself can be used for pumping without a vacuum pump. The product is not allowed to be pumped in the product manual provided by the equipment manufacturer. Except for.

1) Close the valve that the system communicates with the outside world (such as filling valve, air release valve, etc.), and open all connected valves inside the system.

3) Start the vacuum pump for pumping, the air in the system is difficult to exhaust. In order to achieve a certain degree of vacuum, the vacuum is divided into several steps, and the interval is about 10 minutes to equalize the pressure in the system. The residual pressure of the ammonia system vacuuming should be less than 7.999 kPa; the residual pressure of the Freon system should be less than 1.333 kPa.

4) After the vacuum level is reached, first close the bypass channel, then stop the vacuum pump, remove the suction pipe, and screw the plug of the exhaust valve bypass hole.

5) After vacuuming, it should be kept for 24h, and the boost in the system should not exceed 666.61Pa. If the pressure rises faster, the cause should be identified and eliminated.

The connection when the vacuum pump is evacuated is shown in the figure below. The method of use is as follows: 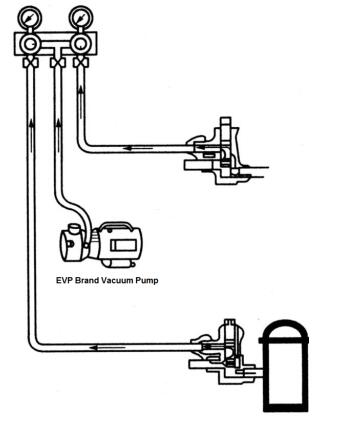