Plan of software steps of water ring vacuum pump system, waste chlorine caused by liquid chlorine packaging (key is composed of chlorine and air) enters into similar vacuum tank, and the water ring vacuum pump uses 98% (WT) sulfuric acid as material to carry out liposuction of circulation system, maintain the vacuum value of similar vacuum tank at 30 ~ 40kpa, and ensure the smooth operation of liquid chlorine filling cylinder. From the water ring vacuum pump, the vapor-liquid compound (the key is composed of chlorine + gas + sulfuric acid) enters the gas-liquid separator to carry out vapor-liquid separation, and the waste chlorine from the separation equipment enters the chlorine gas desulfurization tower. The NaOH water solution with the concentration value of 18% (WT) is used to digest and absorb the chlorine gas, and the non condensable gas (gas) is extracted by the centrifugal fan and discharged. The temperature of sulfuric acid from the separation equipment will rise after it is shrunk by the liquid ring pump, so the calorific value needs to be removed. The sulfuric acid goes through the spiral plate cooler to cool the circulating water in the circulating system, and then enters the vacuum pump inlet. The waste chlorine gas caused by the liquid chlorine packing of the continuous circulating system is recycled. During the packaging of liquid chlorine, the air permeated by waste chlorine contains water. It’s very southern weather. The air has a large amount of water. The water is digested and absorbed by sulfuric acid after contacting with air-fuel ratio and sulfuric acid, resulting in the thinning of sulfuric acid. Therefore, it’s necessary to drain and replace sulfuric acid on time to avoid the corrosion of machinery and equipment. When the concentration of hydrochloric acid drops to 92% (WT), 98% (WT) sulfuric acid needs to be added from the upper tank for replacement.

2. Shortcomings of software equipment in the operation of water ring vacuum pump system 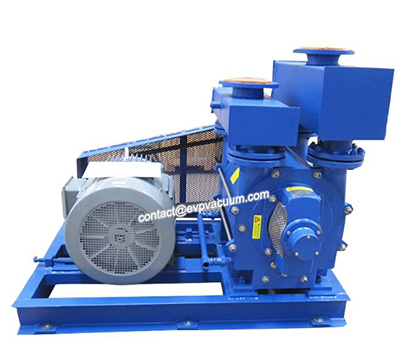 3. The treatment of software and equipment problems in water ring vacuum pump system

In order to deal with the problem that the pressure at the outlet of vacuum pump is not adjusted immediately due to the manual service, resulting in the destruction of machinery and equipment caused by hydrochloric acid breaking in the circulation system, endangering the production and manufacturing of system software, environmental pollution caused by chlorine leakage, and safety accidents caused by poisoning of workers. The software of vacuum pump system is updated and transformed in processing technology, as shown in Figure 2. At the outlet of vacuum pump, i.e. the outlet pipe of vapor-liquid separation, an automatic regulating valve is installed in series with the original manual regulating valve, and a remote pressure inspection equipment is installed in the gas-liquid separator. The DCS is used to carry out real-time monitoring and automatic adjustment of the actual operation. The regulating valve can be set to adjust the oil pipe pressure according to the pressure of vapor-liquid separation, and the outlet pressure of the stable vacuum pump is 0.1MPa, when the pressure of the gas-liquid separator When it is less than the preset value (0.1MPa), DCS will cause low pressure to prompt the main control chip operator to inform the on-site operator to check the operation status of the vacuum pump system software, whether the hydrochloric acid of the circulating system is finally broken, and whether the vacuum value of similar vacuum tank is lost, etc. Improve the efficiency of the liquid chlorine packaging filling cylinder and the production and manufacturing load of the system software, so as to avoid the environmental pollution caused by the leakage of chlorine into the air and the safety accidents caused by the poisoning of the staff.