Vacuum concentration: under the guidance of secondary steam and the suction of high vacuum of separator, the concentrated materials and secondary steam enter the separator along the tangent direction at a faster speed. Vacuum technology preserved the nutrition and aroma of raw materials. 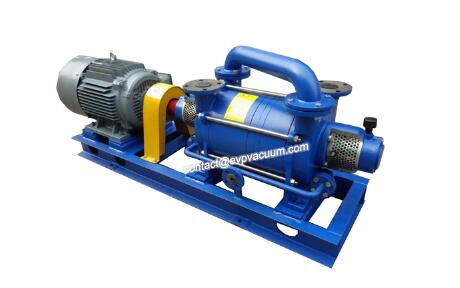 For every 1000 kg of sugar beet processed by sugar factories, about 125 kg of sugar juice can be obtained, and the sugar content is generally more than 10%. The syrup is then heated in an evaporation tank and condensed into a syrup containing 35% water. Because there is still a lot of water content, sugar can not be crystallized. At this time, syrup should be placed in a vacuum tank, and then concentrated into a cream containing 7-8% water, so sugar gradually crystallizes from the cream of saturated solution.

At first, the syrup was far from saturated due to the large amount of water, so the water should be evaporated under the maximum vacuum, the required vacuum is – 620 ~ – 640 mm Hg, and its boiling point is 68-70 ℃. If the concentration of the solution increases, the boiling point will increase. With the continuous concentration of syrup, the temperature of syrup will gradually rise to 74-77 ℃ under the same vacuum. The second stage of vacuum sugar boiling can be carried out under low vacuum, which requires a vacuum of – 420 ~ – 460 mm Hg and a boiling point of 93-94 ℃.