The structure of multistage claw type dry vacuum pump plays a very important role in material consumption, volume and energy consumption. This paper introduces the newest structure –, screw the claw structure, its principle and structure of two of the most classic: spiral (Germany) and the jaw (UK) is presented and compared, reverse claw spiral structure can greatly shorten the length of the pump and save a lot of material, improve the extraction efficiency, reduce machining accuracy and improve the performance of extraction on the development and popularization of claw type dry vacuum pump has a very good role in promoting.

Multistage claw type dry vacuum pump is the end of last century development mature new (variable volume) vacuum pump, vacuum technology network research it has the following advantages: the pump cavity without oil, oil is pumped container no pollution, and the atmosphere, single pump can achieve 3 Pa and so on, is very widely used in the electronics industry, replace the oil seal mechanical pump and rotary piston vacuum pump. Due to its excellent performance, it is more and more widely used in aerospace, nuclear industry, chemical industry, pharmaceutical industry, environmental protection and other industries, and shows an increasing trend year by year. The main structural types are spiral type and reverse claw type, each of which has its own advantages. Comparatively speaking, reverse claw type has more obvious advantages than spiral type. However, due to the limitation of its structure, the pumping speed of the pump is basically less than 600 M3/h at present, which cannot meet the requirements of large pumping speed such as chemical industry and pharmaceutical industry.

Combined with the advantages of the above two structures, the spiral claw structure is introduced to achieve the effect of less materials, lower energy consumption, better maintenance, and greater pumping speed, and can be suitable for chemical, pharmaceutical, environmental protection and other fields.

The working principle of the traditional classic claw pump

As shown in Figure 1, cavity A and inlet 4 are connected at the position of Figure 1A. As the rotor pair moves in the opposite direction synchronously, the volume of cavity A increases, and the gas is inhaled into the pump. The gas in cavity B is also gradually compressed under the action of the rotor pair. Figure 1 B position. A cavity volume continues to get bigger, continue to breathe in, at the same time, B cavity volume under the rotor of the synchronous movement of the opposite direction of gradually become smaller, through to the location of the movement to vent air through the vent line to the next level, the process will continue until figure 1 c position, suction and exhaust simultaneously, referred to as suction exhaust process; In figure 1C, chamber A reaches its maximum volume, the volume of chamber B and the end of suction reaches its minimum, and the end of exhaust. The rotor blocks the intake and exhaust ports and plays the role of automatic closing; In FIG. 1D, with the operation of the rotor, the gas not discharged from chamber B is mixed with the gas inhaled from chamber A, neither inhaling nor venting, which is called the transition process.

Continuously repeat the above 3 processes, to achieve the purpose of continuous uninterrupted vacuum, because the pump chamber does not need water or oil and other media, has the following advantages: can pump a variety of chemical gases, special stainless steel made of claw pump can also pump corrosive gases. It has been widely used in aerospace, pharmaceutical, chemical, nuclear and other industries. 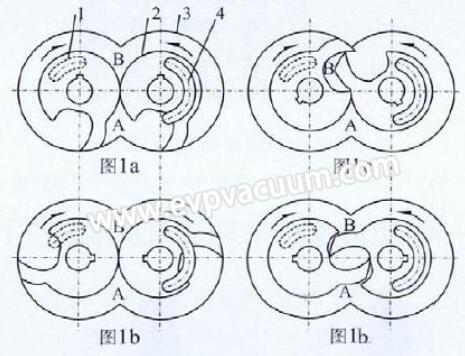 As shown in Figure 2, a long passage is designed at the first stage vent so that the first stage exhaust gas can enter the second stage intake. At the same time, in order to ensure that when the first stage exhaust, the second stage pump body begins to inhale, so the second stage synchronous rotor is compared with the phase difference of a certain Angle behind the first stage. Through research, it is found that the phase difference between 30° and 120° is reasonable, and the most reasonable Angle needs further study. The channel should not be too small. According to this method to design the third level rotor pair and the fourth level rotor pair and channel, it will be found that the rotor pair of each level in turn along the direction of rotor pair rotation behind the previous level, series on the main shaft presents a spiral layout, known as spiral. 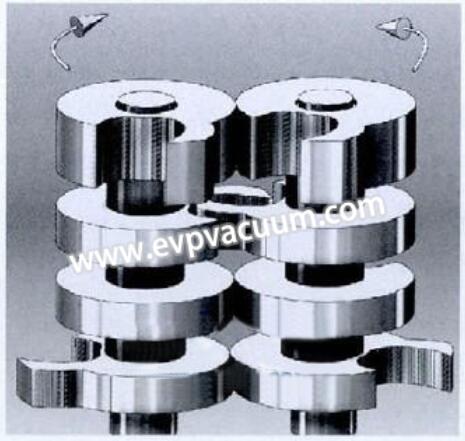