Biogas is a secondary energy source and a renewable energy source. As a new type of energy-saving and environmentally-friendly energy, it has been more and more popular in the environment of energy-saving and environmental protection. What is biogas? It is a kind of mixed gas produced by the fermentation of microorganisms under anaerobic conditions. The chemical name is methane. As the name suggests, it is the gas in the swamp. People often see that in swamps, sewage ditches or manure tanks, there are bubbles coming out. If we strike a match, we can ignite it. This is the naturally occurring biogas in nature. It is a kind of combustible gas produced by various organic substances through the fermentation of microorganisms at an appropriate temperature and PH value in isolation of air (reducing conditions). 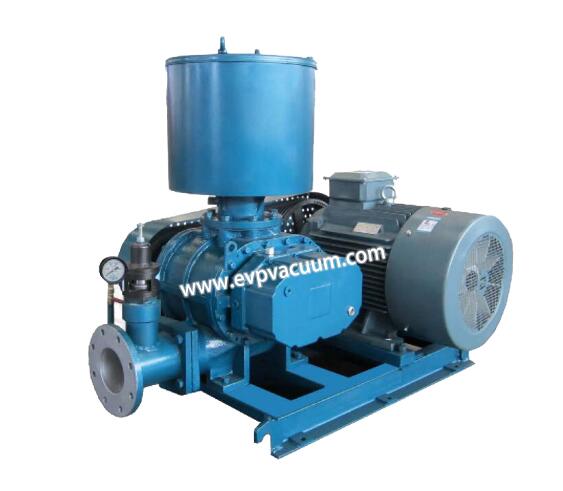 As a mechanical device, Roots blower also plays an important role in the development of biogas energy: biogas boosting. Generally, the volume of the biogas digester is about 300 cubic meters, which can produce 150 cubic meters of gas per day. The average daily gas consumption per person is 0.5 cubic meters, so it can be used by 300 people. The air volume of the blower conveying the biogas should be controlled at about 1 cubic meter per minute, and the pressure should not be higher than 10 kPa. It is worth paying special attention to: the fan impeller for conveying biogas must be treated with anti-corrosion, and the fan cavity must be treated with anti-corrosion and sealing.

It is a non-contact dynamic seal that uses fluid to flow through a series of throttling gaps and expansion cavities to make the working medium produce a throttling effect to limit leakage. Labyrinth seals are widely used in the shaft seal of the wallboard of Roots blowers. The sealing mechanism can be simply explained as that the fluid passes through many tortuous passages, and after multiple throttling, great resistance is generated, making it difficult for the fluid to leak, thereby achieving the purpose of sealing. This kind of seal is generally suitable for air conveying occasions, and its use is restricted when conveying toxic, flammable and explosive gases. The standard type Roots blower wallboard seal generally adopts this form of seal.

It is a kind of sealing form to fill the leakage channel with filler to prevent leakage. The packing seal has simple structure, convenient assembly and disassembly, and low cost, so it has been widely used. In the packing and sealing structure of Roots blower, packing packing, molded PTFE packing and skeleton oil seal packing are more commonly used. Because this type of seal is a contact type seal, it is easy to cause abrasion of the shaft (the part in contact with the oil seal lip or the PTFE packing). Because of its simple structure, easy assembly and disassembly, low cost, good sealing effect, and low requirements for working environment and maintenance, it has been widely used in fertilizer plants and other industries.

Also known as end face seal, it is a device that restricts the leakage of working fluid along the shaft. It is usually composed of stationary ring (stationary ring), rotating ring (moving ring), elastic or magnetic elements, rotating ring transmission parts and auxiliary sealing ring. During work, the two mating surfaces of the rotating ring and the stationary ring rotating relative to each other and the auxiliary seal are used to realize its sealing function. Whether the mechanical seal can work normally depends on whether a stable and reliable lubricating liquid film can be established between the two ends and the frictional heat can be exported in time. Because the mechanical seal has the characteristics of reliable work, small leakage, long working life, end face wear can be automatically compensated, no frequent maintenance, low power loss, and no wear to the shaft, it is widely used in machinery industry, petroleum and chemical industries, etc. Class rotating machinery.