1. According to the quantity of components in the distilled mixture, it can be divided into binary distillation and multiple distillation.

2. According to whether the operation process is continuous, it can be divided into batch distillation and continuous distillation.

3. According to the working pressure, it can be divided into atmospheric distillation, pressure distillation and vacuum distillation.

Distillation is a thermodynamic separation process. It uses different boiling points of components in mixed liquid or liquid-solid system to evaporate components with low boiling points, and then condenses to separate the whole component. It is a combination of evaporation and condensation operation units. Compared with other separation methods (such as extraction, filtration and crystallization), it has the advantage that it does not need to use other solvents other than system components, so as to ensure that no new impurities will be introduced.

In order to solve the above problems, after analysis and research, I think it should be considered from the perspective of improving the vacuum degree. In theory, high temperature will accelerate the Resinification of materials, while a longer residence time of materials will increase the amount of resin. Improving the vacuum degree in the pot is undoubtedly the best way to solve the two problems of long distillation time and excessive distillation residue.

It has been proved in practice that when roots vacuum pump is used in distillation process, high vacuum is conducive to the evaporation of magnesium chloride and magnesium, and also to reduce gas pollution. In the later stage of vacuum distillation, the vacuum degree is not more than 0.013pa. At the same time, it can improve the recovery rate and increase the recovery. In addition, the use of Roots vacuum pump and oil-free vacuum pump in series can effectively shorten the operation time and reduce the resin residue, thus reducing the raw material consumption of the product. 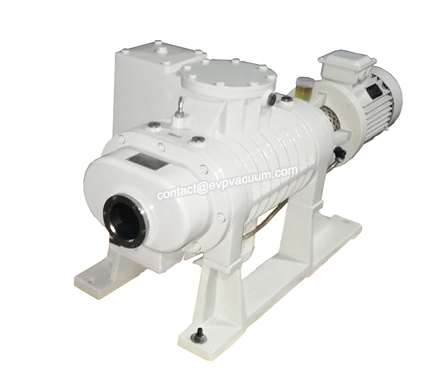