The steam jet vacuum pump is a vacuum pump equipment with a certain pressure. The steam flows through the nozzle to reduce pressure and increase speed. The potential energy of the steam is converted into kinetic energy and injected into the mixing chamber at supersonic speed. The steam is mixed with the pumped medium for energy exchange. The mixed gas enters the diffuser, decelerates and pressurizes, and the dynamic flow is converted into pressure energy. In order to reduce the pumping load of the later stage pump, condensation is configured Through convection of two kinds of medium with certain temperature difference, heat exchange is carried out to condense high-temperature medium.

The working principle is as follows:

Although the structure of the steam jet pump is simple, the operation wear is small, the material requirement is low, and the maintenance amount is small. But the requirement of working steam is high, and the amount of steam used is large.

The internal components of jet vacuum pump are mainly composed of Laval nozzle and diffuser. The structure of single-stage steam jet pump is shown in the figure, and the structure of other stages is basically the same. Its working process can be divided into three stages: adiabatic expansion stage, mixing stage and compression stage.

Structure diagram of the unit: 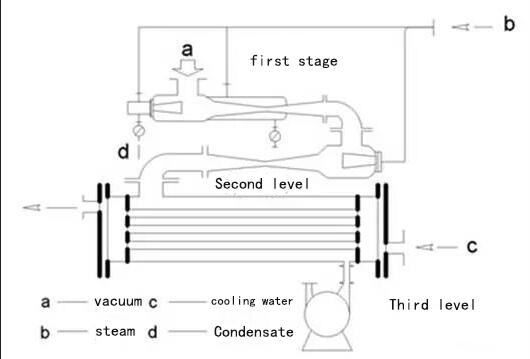 1. The first stage steam jet vacuum pump is connected to the production equipment.

2. The second stage steam jet vacuum pump continues to compress the above working medium, and then the discharged gas is led to the tube condenser for condensation.

1. Nozzle clogging: there are large particles in the pipeline that block the nozzle, causing vacuum failure;

2. Nozzle wear: after nozzle wear, the speed of steam entering the vacuum pump slows down, which affects the vacuum effect. 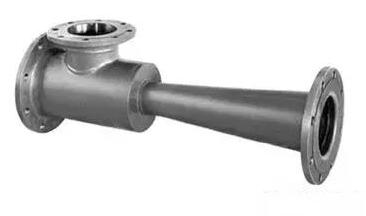