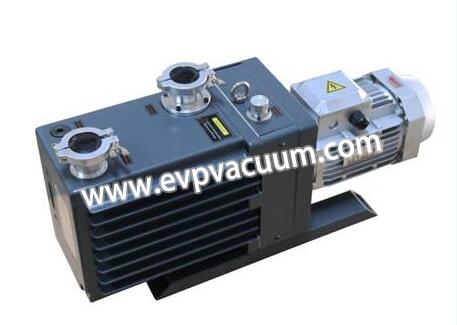 1. Large suction volume. The pumped volume of large bromine coolers can be up to about 40m3.
2. Inlet pressure for continuous operation may be high. Users all over the country, medium and small pumps are carried home debugging, need to start from the atmosphere pumping.
3. High water vapor content. The lithium bromide solution as an absorbent contains 45% water. At ordinary room temperature, the saturated vapor pressure of water is relatively high, so the pump oil is easy to be emulsified when being pumped, and the water vapor will condense in the exhaust port and exhaust pipe, which will reduce the vacuum degree, extend the extraction time, increase the oil level, and cause the oil injection. When the water cut is too high, the oil will be badly lubricated and cause the occlusion.
4. It’s corrosive to some extent. Due to improper operation, the lithium bromide solution will be pumped into the pump. If not promptly removed from the pump, it will cause metal parts rust.
5. Due to the reason L ~ 3, the pump in the process of work may appear high pump temperature, causing the operation gap is reduced, mechanical parts increase, as well as wear, stuck, if not closed in time, will burn out the motor, but also accelerate the aging of rubber parts, the deterioration of the pump oil.

The following is a comparison of the technical requirements of the general pump manufactured according to the industry standard JB/T6533 — 1997 rotary vane vacuum pump and some of the results of the actual test of the bromine cooler.
The continuous operation time of 1 pump under the inlet pressure of lOOkPa(1 atmosphere) — 6kPa with 2XZ-15 improved pump (15L/s) shall not exceed 16DF080H4 bromine cooler, from atmosphere to 10kPa takes 3min. 73 min.
The maximum operating temperature of the pump should be given in the specification; According to the standard of 16DF080H4 of 2XZ-15 improved pump 97572, the factory test is done under ultimate pressure. When the room temperature is 10℃, the maximum oil temperature is ≥110, and then the working temperature is the lowest. Since the old standard stipulates the maximum ℃, which is estimated to be around 117℃, the temperature rise has been ≥100℃, the high oil temperature is 90, and the temperature rise is ≤65℃, the actual pump temperature that the general product has been subjected to when leaving the factory is ≤90℃.
The maximum suction pressure of the 2XZ-8 improved pump 97147# pump 16DF6100 for long-term continuous operation is only given by the operating manual. The pressure of the combustion absorption chiller and hot water unit in our factory is set as ≤133Pa when pumping from the atmosphere to 2XZ=0.5/1/2/4/8/15 series. It takes about 110 minutes for 10000Pa and 170 minutes for atmosphere to reach 4000Pa.
The scope of application of the pump is not specified in this standard. The exhaust pipe has strong residual pungent odor, indicating that it can only be given by the manufacturer in the instruction. There is a possibility that lithium bromide solution or steam may be pumped into the pump.
5 intake diameter has standard provisions, such as 8L/ S pump for the user requires the outside diameter of 34. Phi is 40.

It can be seen from the above that the ordinary direct-connected pumps manufactured, accepted and delivered according to the standard JB/76533 — 1997 cannot guarantee the actual working condition requirements of the lithium bromide refrigerator, and operation faults may occur and damage the spare parts of the pump. Ordinary foreign pumps and imported technical products also stipulate that corrosive gas cannot be pumped, dry air or dry nitrogen cannot be pumped, and some stipulate that imported oil of designated grades must be used to ensure its performance, and the oil-changing period is provided as a guideline. For example, for low vacuum drying, the oil change period is required to be less than 1 week. Jing pointed out that the cost of repair caused by non-compliance should be borne by the user. Some also pointed out that for high temperature to be a special order. Some set the maximum operating temperature of the pump, such as: 80±5℃.

In order to prevent the pump from stopping and returning oil, some foreign companies also stipulate that the user must install the vacuum valve at the inlet of the system and install the air release valve between the pump and the valve. When the pump is stopped, close the vacuum valve first, then open the air valve, so that the pump is in atmospheric state, in order to prevent oil return, hinder the next start and pollution of the intake pipeline and system. Therefore, the use of foreign products pump, not only the price is much higher, but also because of the import oil price as high as 250 yuan /kg, expensive parts, maintenance, repair costs will be very high.

However, if the countermeasures are taken, the domestic pump is improved appropriately, and the appropriate operation method is adopted, it can still be used in the extraction of lithium bromide refrigerator. Users will be able to significantly reduce costs and maintenance costs. Improvement measures, improve the material and modify the design, high quality domestic oil pump, increase the factory test project, according to the agreement with accessories, such as inlet nozzle strictly parts processing, inspection, assembly, debugging and so on, in addition, the pump itself is the measures to prevent stop pump return oil, new factory regulations stop pump oil 4 hours and shall not return into the intake pipe. If equipped with solenoid valve, can be more reliable to prevent the pump back oil.

After the improvement, the pump can basically meet the requirements of lithium bromide absorption refrigerating machine

It is not difficult to see from the above introduction that it is inappropriate for the standard ordinary rotary vane vacuum pump to be directly used in lithium bromide refrigerator for air extraction without test. However, as long as the special order, with proper improvement and reasonable operation, the home-made direct-coupled rotary vane vacuum pump can be used in the extraction of bromine coolers, achieving satisfactory results and significantly reducing the cost, maintenance and repair costs.