After nearly half a century’s efforts, today’s helium mass spectrometer leak detector puts forward new requirements, forcing the renewal of the instrument itself; on the other hand, the leak detection technology is at any time and anywhere to supplement the existing leak detector in the application process of some shortcomings, so the relationship between them is complementary and mutual promotion.

The research progress of helium mass spectrometer leak detection technology has bid farewell to the situation in the early 1940s. It is mainly reflected in the following aspects:

Recently, the small portable leak detector introduced by various countries is not only sensitive, but also portable, which provides great convenience for field work and aerial work.

The pressure of leak detection port can be as high as hundreds of PA, which is very useful for detecting large system and workpieces with large leakage.

Some leak detectors produced in some countries can use dry pumps to achieve the effect of oil-free steam, which provides favorable conditions for leak detection of semiconductor devices such as oil-free systems and chips.

Today’s quadrupole leak detector has a wide range of quality. It can detect not only helium, but also other gases.

Molecular pump exhaust system instead of diffusion pump exhaust system not only solves the pollution problem of oil vapor to the mass spectrometry chamber, but also makes great contribution to the quick start of the instrument and the quick shutdown. In order to adapt to the change of leak pressure and the different requirements of sensitivity, the molecular pump generally adopts multi-stage structure and several different rotating speeds. For example, Switzerland and Japan adopt changing the speed of molecular pump to achieve this purpose, and improve the leak detection sensitivity. In addition, the reverse diffusion leak detection method realizes the leak detection under high pressure and strong strength, and also provides a good condition for the leak detection of positive pressure suction gun.

The application of helium mass spectrometer leak detector has changed from Academy of Sciences, colleges and universities, laboratories and a few scientific research institutions to industrial and mining enterprises, even township enterprises and individual enterprises. It can be said that the application field is extremely broad.

SF6 high-voltage switch and zinc oxide arrester are important parts of power plant and field power transmission and transformation. They often cause large area or local power failure due to leakage, which affects industrial production and normal life of people. Therefore, the economic losses are sometimes incalculable.

1) The high-pressure switch in the connecting box is an aluminum casting, which is easy to have sand holes, and the leakage structure is complex, which is not easy to clean. Generally, the method of leak detection box or helium cover is adopted, that is, vacuumizing the inspected parts, then filling helium into the cover, waiting for a certain time to determine the total leakage rate. Because of the small amount of helium, the detection sensitivity is high.

2) The zinc oxide arrester is based on the requirements of high and low voltage, using different cross-sectional area, thickness and number of zinc oxide pieces, installed in the porcelain sleeve, filled with nitrogen and sealed. Its working principle is that in case of lightning stroke in high-voltage output, the resistance of zinc oxide sheet becomes small, the large current is short circuited to the ground, and the transmission line is protected. If there is no pressure difference between inside and outside caused by leakage, the external humid gas may enter, and destroy the characteristics of zinc oxide sheet, resulting in explosion. 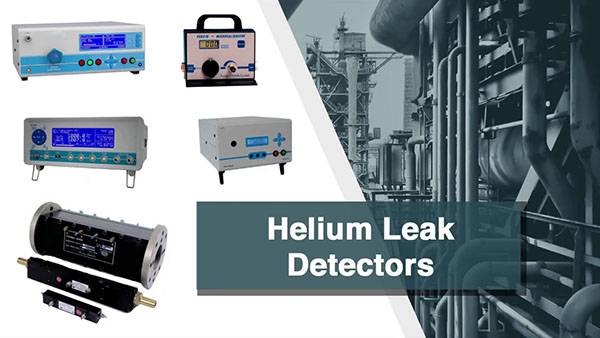 In the automobile manufacturing industry, more than 30 kinds of parts are using helium mass spectrometer leak detector to detect leakage and solve the sealing problem. It includes hydraulic system, brake system, steering system, shock absorption system, even automobile hub. There are still many leak detection areas to be explored, but due to the shackles of ideas and funds and many other reasons, in many areas, we still use the old and relatively backward means to deal with the leak. Product qualification rate and production efficiency are low. In a sense, this way of working restricts the development of productivity.

Therefore, for vacuum professionals, especially those who are engaged in the research and development of vacuum equipment and the production of helium mass spectrometer leak detector, we should make further efforts in the application and promotion of helium mass spectrometer leak detector, and strive to promote the development of vacuum technology in China.