It is necessary to fill a certain amount of working water in the pump before operation. When the pump is filled with water, when the impeller rotates, the water is driven to rotate to form a liquid ring which is tightly attached to the inner wall of the pump shell. The liquid ring and the inner surface of the impeller form a crescent shaped working space between the surface of the impeller wheel and the ends of the two sides of the cover. The space is divided into several chambers which are not connected with each other by the blades of the impeller. The volume of these chambers will increase and decrease periodically as the impeller reverses. Obviously, when the volume of the chamber becomes larger, the fluid will be inhaled, and when the volume of the chamber becomes smaller, the fluid will be kneaded and discharged. Three working stages of suction, contraction and discharge constitute a working cycle of liquid ring pump.

Take transporting gas as an example:

2) Tightening process – when the inter blade turns around the suction inlet and enters the left half turn shown in the figure, because the distance between the pump casing and the outer end of the blade gradually shrinks, the high-speed flow outside the impeller in the circumferential direction will squeeze into the inter blade. In this way, when there is no communication between the leaves and the discharge port, the gas in between is compressed. 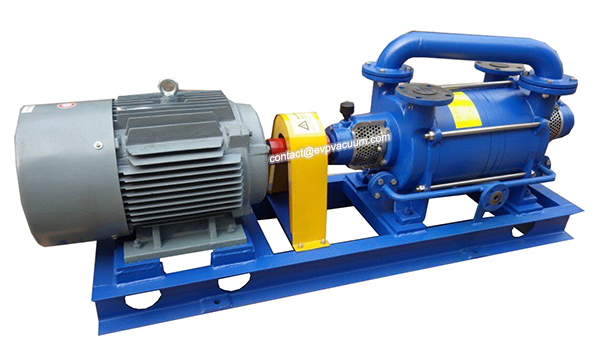