When replacing the non power end mechanical seal, it was found that the seal O-ring on the moving ring was not installed properly during the disassembly. The O-ring should have been installed in the seal groove on the moving ring seat. However, it was found during disassembly and inspection that the O-ring was not so installed, but was wrongly installed in the spring locating plate, resulting in the deformation of the spring, completely failing to play the role of axial static seal, resulting in leakage.

The pressure of the seal cooling water is too high 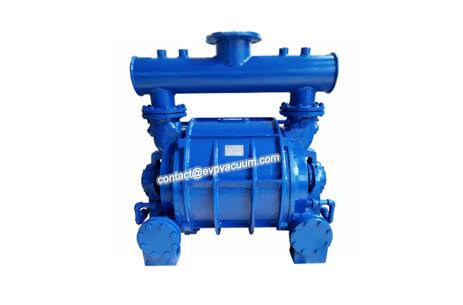 The sealing surface of dynamic and static rings is broken

This is the main reason for the leakage of the machine seal of the water ring vacuum pump.

The power end and non power end machine seal are assembled on the same shaft, the impeller is installed in the middle of the shaft, and the two ends of the shaft are installed with bearing support and fixed. When the power end or non power end machine seal is replaced separately, the bearing (bearing seat) at the corresponding end must be disassembled before the old machine seal is taken out and the new machine seal is installed. At this time, because of the gravity of the shaft and impeller, the impeller and shaft that lose the bearing support at one end must fall down and the shaft inclines to the bearing free end. Because the static ring at the end not removed is fixed on the pump end cover with bolts, while the dynamic ring is fixed on the shaft and rotates with the shaft. In addition, because the fit clearance between the inner ring of the static ring and the shaft is very small, when the shaft collapses and inclines, it will cause: a. the relative displacement of the dynamic and static ring at the end not removed, which makes the sealing surfaces of the dynamic and static rings squeeze each other illegally, causing fragmentation; B. the shaft is directly pressed on the static ring at the end not removed On the inner ring, the sealing surface of the stationary ring is broken or broken.

2. The inner ring of bearing is not installed in place

If the inner ring of bearing is not installed in place, the problem described in 1) above will also occur, because the inner and outer rings are displaced in front and back relative to the axial direction, causing one of the two inner rings and the outer ring to be squeezed by unconventional force. When removing the bearing at the power end, it was found that there was a large scratch on the shaft surface where the bearing was installed. It was analyzed and judged that the inner ring of the bearing was not completely pushed on the shaft shoulder, which was the main reason for the difficulty of turning this time.

3. The clearance between impeller and two end faces of pump is not adjusted properly

4. After the sealing surface of the dynamic and static rings of the mechanical seal is broken, they are stuck with each other.

1. Remove the cooling water pipe of mechanical seal at both ends of vacuum pump;

2. Remove the power end pulley (this step is not available when replacing the non power end mechanical seal);

5. Use jackscrew to push out and remove the bearing seat and bearing together. (at this time, hoist the shaft from the disassembly end to facilitate the bearing ejection);

6. Remove the old mechanical seal from the shaft;

7. Carefully sleeve the new mechanical seal after inspection on the shaft;

9. Install the bearing and bearing seat back on the shaft, add lubricating grease to the bearing, tighten the inner ring and lock the back cap, and install the bearing gland (this step also requires the coordination of hoist shaft lifting);

10. Try turning to see if it is easy. Pay special attention not to damage the machine seal during turning;

11. Reassemble the mechanical seals at both ends from the shaft to the seal box;

12. Reassemble the belt pulley (this step is not available when repairing the non power end);

14. After the maintenance, the site shall be cleared after the completion of the work.