How to improve the pumping speed of rotary vane vacuum pump

In the whole process of continuously accelerating the strength of vacuum pump products, it is necessary to accelerate the exertion of its practical application ability with reliable product performance, enhance the practical performance of the product combined with the performance advantages of its product value strength, and continuously promote the embodiment of its overall operation advantage level with reliable product strength. Let’s take a look at how to improve the pumping speed of rotary vane vacuum pump.

3. Vacuum pump is lubricated and sealed by oil film. In the process of operation, due to severe friction, the oil film will overheat locally, causing the pyrolysis of vacuum pump oil, releasing oil vapor and unsaturated hydrocarbons. Therefore, the substance produced by vacuum pump oil pyrolysis is the main pollution source.

4. The backflow of oil vapor is related to the vacuum degree of the vessel, that is, the reflux rate is different with the change of pressure. When the vacuum pump is just started, the density of gas molecules is large, and the relative velocity is very large. At this time, the oil vapor is difficult to reverse diffusion. From the start to the pressure range of 1 Torr, due to the frequent collision of gas molecules in the dynamic vacuum system, on the one hand, it increases the resistance of oil vapor molecules backflow, on the other hand, it can increase the ability of removing oil vapor molecules under the sweeping of space pumping air, so the backflow of oil steam can be effectively prevented. Therefore, when the pressure P > 10-1 Torr, the backflow rate of oil steam is quite small, and the pumping speed is very small The loss is not big. 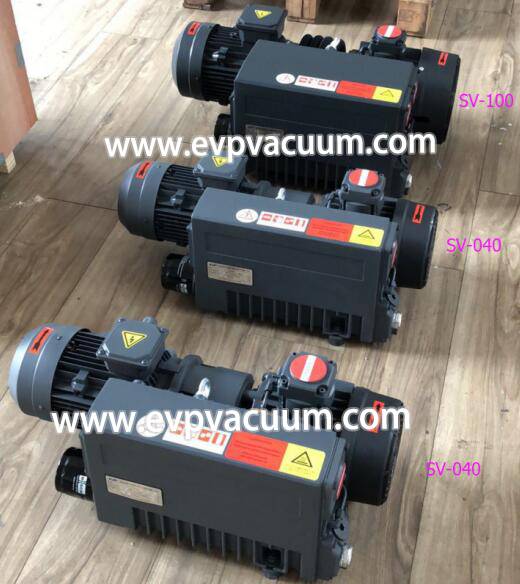 When the pressure is between 10-1 and 10-2, the air flow changes into a transitional flow state, and the oil vapor begins to reverse diffuse. After that, with the pressure decreasing, the gas becomes molecular flow, and the reflux rate is higher and higher. The reverse diffusion of oil vapor molecules reaches the maximum between 10-3 and 10-4 Torr, and the pumping speed decreases faster.

To sum up, the above methods can improve the pumping speed of rotary vane vacuum pump

1. Considering the structure, molecular sieve, activated alumina and other adsorption wells can be used to effectively capture the vacuum pump oil vapor. The rotary vane vacuum pump can also be combined with various adsorption vacuum pumps for pre pumping, which can prevent the reverse diffusion of oil vapor.