Condenser installed in front of the unit:

In order to make the unit as small as possible, try to make the steam to be pumped condense before entering the pump unit, so that the remaining is non condensable gas and trace residual steam. The volume of gas decreases under the same pressure after cooling. Therefore, after condensation, the required air extraction is reduced, and the pump can be selected to be smaller accordingly.

Which way is more economical? As the case may be, examples are as follows:

The system needs to pump out 50kg of water vapor per hour, and the volume flow is 50000m3 / h when the suction pressure is 1torr.

1) Three roots vacuum pumps are connected in series and one water ring vacuum pump is used as the unit composed of the front stage to pump the above water steam. The total power of the unit is 90kw.

2) In order to make the steam condense before reaching the vacuum pump, a condenser and a cooling device with a power of 30000 kcal / h should be installed at position A. under the suction pressure of 1torr, the condensing temperature of the water steam is – 19 ℃. In order to ensure continuous operation, the condensing temperature of the condensing device should be – 25 ℃, and two condensers should be installed in parallel. According to the calculation of the components of non condensing gas, the pumping capacity of vacuum pump can be reduced to 1000 ~ 2000m3 / h, and the power of the total unit (including the consumption power of condenser) is also 90kw.

According to the comparison of the above three methods, the third scheme is the best, which can reduce the power consumption of 15kw.

To sum up, only non condensable gas is left after water vapor cooling. When the pressure is very low, the specific volume of water vapor is quite large. After these condensable vapor condenses, the air volume required by the vacuum pump is obviously greatly reduced. In addition, no matter whether the steam condenses or not, as long as the temperature of the gas decreases under the same pressure, its volume flow will decrease. For example, it is not uncommon for gases with a temperature of 200-300 ℃ in chemical process. After cooling from 300 ℃ to 50 ℃, the volume of dry air can be reduced by about 45%, so that a smaller capacity vacuum pumping unit can be selected. 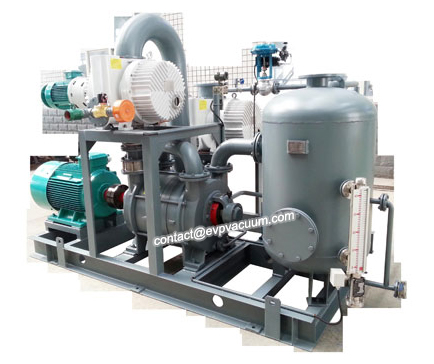 Operation sequence of the unit: